Mirage, the Italian company based in Venegono Inferiore (VA), was created in the Sixties as a sole proprietorship entity and in the mid-Eighties it became a company. The company is now led by the second generation, Cristiano Milone and his brothers.

The Lombard company focuses its Made in Italy production on foreign markets (in particular the USA) and in 2019 its turnover was in excess of 13 million euros.

In this interview, CEO Cristiano Milone talks about the direction his company has taken in recent months.

Your company is highly dedicated to exporting: could you describe the current situation?

In our company, exports represent 99.5% of turnover; 75% of these go to the United States. Obviously, considering that Covid-19 reached the States after Asia and Europe, we are feeling the effects. Luckily for us, our customers use the online sales channel. In general, however, I feel positive despite the situation that is objectively difficult.

Are you one of the companies that have converted their production to PPE?

Yes, when Covid-19 broke out in Italy between February and March, we looked at this possibility. Starting from the production of injected eyewear, we identified six models that were suitable for modification. These glasses passed the EN166 test and became PPE.

We contacted the Italian Civil Defence, with little interest from these institutions...

However, we worked with the Valle D’Aosta Region and with some private institutes.

Did the conversion lead to the creation of charitable projects?

We made donations to Civil Defence in Milan, to SOS Malnate, entities in our territory that provide transport for the sick, and also to the Ryder Italia OnlusAssociation in Rome.

Do you already have some idea about what you will present at MIDO 2021?

We have a variety of projects underway and the basic idea is to launch new products in all directions (sunglasses in various materials, including eco friendly, for uses ranging from sport to fashion), probably there will be room also for PPE. 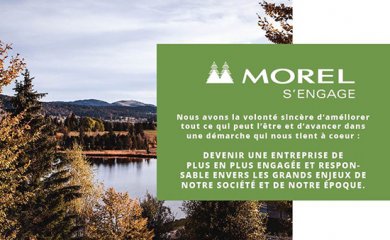 Morel is a member of the United Nations Global Compact.